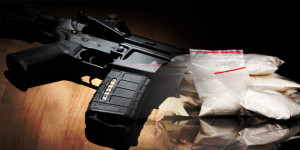 Siblings, Melvin and Carolyn Dillard, are being charged with theft by receiving stolen property and possession of cocaine with intent to distribute.

On New Year’s Eve, Tuesday, a Moultrie Police Officer heard someone firing shots in celebration of the holiday. The officer then went to investigate where the shots came from.

Upon arriving, Carolyn Dillard told officers they could search her house. Police then found a .22 caliber AR-15 rifle and a .44 magnum rifle, both stolen from a business in Perry. Police also seized ammunition, crack cocaine, and scales used to measure the cocaine.

Carolyn Dillard is also charged with possession of a firearm by a convicted felon.