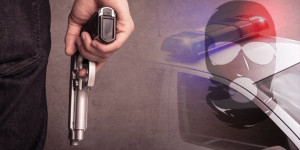 MOULTRIE, GA – After two robberies, in one week, the manager of the Chevron Gas station in Moultrie is taking steps to try and prevent any more robberies.

Around 12:00 a.m. Thursday morning, a black Honda Passport pulled into the backside of the Chevron Gas station on Veterans Parkway in Moultrie. A masked man jumped out of the vehicle and walked inside. The masked man, dressed in purple, then pulled out a pistol, walked over to the cashier, fired a shot, and then demanded money from the cash register. The robber walked out of the store and got back into the car, being driven by another suspect, getting away with nearly $600.

A traffic stop of the Honda Passport resulted in the arrest of the driver, 26 year old Demetrius Sinclair of Moultrie. The shooter, however, remains at large.

No one was hurt in the robbery. Sinclair remains in the Colquitt County Jail and is being charged with aggravated assault and robbery. If you have any information that might help Moultrie Police Department catch the masked man you are asked to call (229)-985-3131.