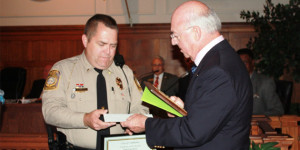 VALDOSTA, GA – Mayor John Gayle and Valdosta Chief of Police Brian Childress honored Lt. Earl Durrance as the city’s December 2013 Employee of the Month at the Dec. 5 City Council meeting. Lt. Durrance received a framed certificate, a check for $200, and his name appears on a plaque that is displayed inside of City Hall.

Lt. Durrance has been employed with the VPD since 1988. As a lieutenant in the Patrol Division, his many responsibilities include supervising sworn personnel, responding to citizens’ complaints, investigating and reviewing officer reports, and testifying in court as required. He also assumes the responsibilities of the shift commander in the absence of his supervisor and provides emergency rescue and aid, as needed.

Several months ago, the VPD was dispatched to an accident on South Forrest Street, where a teenager’s leg was run over by a train. The teenager, Christopher Moore, had attempted to pass in between the train cars, while the train was stopped. When the train started back up, Moore’s bike was caught and his leg was severed. Lt. Durrance arrived on scene and discovered the teenager lying on the railroad with his leg severed just below the knee. The teenager appeared to be in shock and was drifting in and out of consciousness. Realizing the dire situation before him, Lt. Durrance obtained the quickest materials he had access to—a cloth strap and a screwdriver he obtained from a nearby citizen—and prepared a tourniquet which stopped the bleeding. Lt. Durrance’s quick response sustained the young man’s life until additional emergency personnel arrived.

Lt. Durrance continued to go above the call of duty in the weeks and months following the accident, regularly checking on the family and on Moore’s recovery.

Following the award presentation at the Dec. 5 City Council meeting, Lt. Durrance donated his Employee of the Month award check to Moore and his mother, who were also present at the meeting. 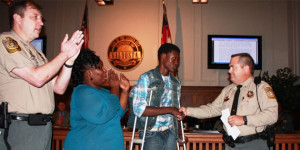 “We are thankful that Lt. Durrance arrived on the scene when he did and that he knew what to do,” said Moore’s mother, Chrystal Sims. “I’m confident that it is because of Lt. Durrance’s quick response that my son is still alive today.”

Moore, who looks forward to playing basketball again once he gets his prosthesis, calls Lt. Durrance, “a new member of his family.”

The City of Valdosta applauds Lt. Earl Durrance for his quick assessment of an emergency situation, his life-saving skills, his generosity, and for being named the December 2013 Employee of the Month.