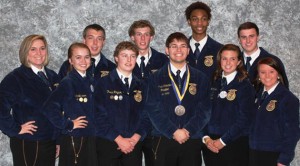 LOUISVILLE, KY – Valdosta native Jacob Schindler was named American Star at the National FFA Convention this past week. Other members of the Lowndes FFA Chapter competed at the convention, and the Lowndes Chapter received national recognition.  Schindler is a member of the Lowndes County High School FFA Chapter here in Valdosta. He is the son of Dr. Julie and Eric Schindler. Chance Hingson and Callie Warren were recognized in the 2013 National FFA Agriscience Fair awards. The National FFA Agriscience Fair is a competition for FFA members who are interested in the science and technology of agriculture. It is held each year during the National FFA Convention & Expo and sponsored nationally by Cargill, John Deere and Syngenta.

To qualify for the National FFA Agriscience Fair students must be in grades 7 – 12, conduct a scientific research project pertaining to the agriculture and food science industries and present their findings to a panel of judges with a display and report. All national participants are selected as the state winner at their state agriscience fairs and earn national competition eligibility after being placed in the top – 15 within their respective categories. All members of the Lowndes FFA exhibiting in the convention were awarded “Top Three” in their divisions.  Emily Warren and Hunter Corbett finished in 2nd place with their Environmental Systems team project, Landon Herring and Ben Herring finished 2nd with their Food Systems team project, and Camille Schroer and Kaylee Griffin finished 3rd with their Social Systems team project.

The Lowndes FFA Chapter was recognized by the National FFA Organization as a “Two Star” chapter.  This recognition is awarded for the Chapter’s work in member, chapter, and community development. The National FFA Organization provides Agricultural education to 579,678 student members in grades 7 through 12 who belong to one of 7,570 local FFA chapters throughout the U.S., Puerto Rico and the Virgin Islands.

The Lowndes FFA Chapter will be holding a hog show tomorrow, Tuesday November 5th, with 120 students from three surrounding counties.