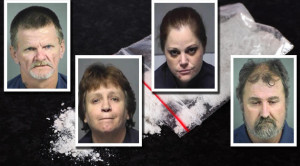 VALDOSTA, GA – On Tuesday evening, investigators from the Special Operations Division of the Sheriff’s Office conducted a traffic stop on Sermans Road near Lester Road. During the stop officers performed a search of the vehicle and found approximately $1,800 worth of meth and a small amount of marijuana from the driver and passengers of the car. Johnny Keith Rambo, 53, Bonnie Nix, 56, Danielle Parkinson, 36, and George Beckham Jr., 53 all from Valdosta, were arrested as a result of the discovery of the methamphetamine. Investigators also found Hydrocodone and Alprazolam, class 3 narcotics, on Nix.

The four people arrested were taken to Lowndes County Jail and booked on their charges. Sheriff Prine is asking that anyone with information on this case, or any other case to contact the Lowndes County Sheriff’s Office at {229} 671-2950 or anonymous tips can be provided at {229} 671-2985 or on line at www.lowndessheriff.com.