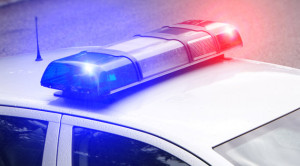 MOULTRIE, GA – A Moultrie man was arrested on Monday, October 28th, after running from police. William Eric Green, 51, 518 Northside Drive, was charged with driving  with a suspended license, fleeing or attempting to elude, failure to maintain lane, and expired tag. Police say Green accelerated after seeing an officer turn around to follow him. He then turned off onto a side street and slammed his car into a utility pole. The car then caught fire and Green was caught shortly after he fled the vehicle on foot.