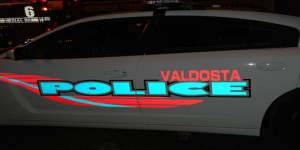 Valdosta, GA-
A 45-year old Valdosta man is behind bars, charged in the Wednesday night armed robbery of a Lake Park woman. The incident happened around 10:30pm in the parking lot of the Wal-Mart on Norman Drive.

The victim told police that a black male pulled a knife on her and demanded her purse. After a brief struggle, he grabbed the handbag and fled the area.

Thanks to surveillance video, police identified the robber as Kenneth Lewis, a man whom officers ‘have had contact with’ in the past. He was taken into custody at his home Thursday morning and charged with armed robbery. More charges may be filed.