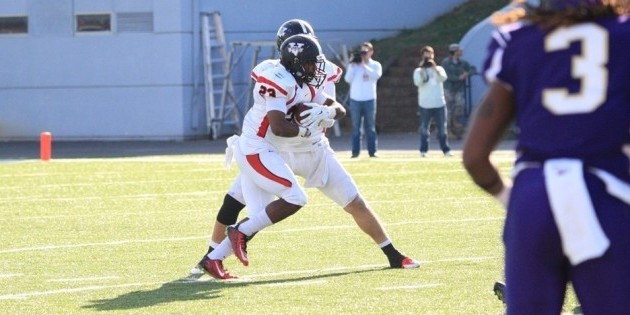 FLORENCE -– In Division II football, it’s not about polls and popularity.  The title is decided on the field.  Valdosta State made the next step toward that title with a first round win over Gulf South Conference foe North Alabama.

With the win, Valdosta State impvoed to 9-2 on the season and advanced to next Saturday’s second round game at Lenoir-Rhyne. North Alabama finished its season with a 9-2 record.

The Blazers ran for 395 yards in the game, four more yards than the old school record of 391 set against Arkansas Tech on Septmber 25, 1999. Overall, VSU tallied 629 yard of offense, which ranked as the fifth-highest total in school history.

The first half of the game featured plenty of offense as the two squads combined for 595 yards. The UNA defense entered the contest allowing just 318.3 yards per game on the season, but surrendered 335 to VSU in the half while the Blazer Black Swarm defense, which allowed 351.9 yards a contest before the contest, gave up 260 to the Lions.

North Alabama struck first in the game as, after forcing a Blazer punt on the first possession of the game, Luke Wingo completed an 88 yard pass to Jarret Smith on the first UNA play from scrimmage to put the Lions in front 7-0 less than 90 seconds into the game.

Valdosta State answered with a 23 yard field goal from Anthony Pistelli on the ensuing drive, but North Alabama needed just six plays and 2:23 off the clock to again find the end zone. The key play on the Lion touchdown drive was a 58-yard completion to Diamond Simmons that moved the ball to the VSU seven. On the next play, Wingo kept the ball for a seven yard run that put UNA up 14-3 with 7:50 to go in the first quarter.

The Blazers answered the touchdown two drives later as it marched 66 yards on five plays. Jake Medlock and Chris Anderson hooked up for a 29 yard completion on first down before three straight runs moved the ball to the UNA 12. Medlock again found Anderson on a pass and the wide out broke a tackle before finding the end zone to cut the VSU deficit to 14-10 with 1:33 to go in the first quarter.

Valdosta State took the lead on its next possession as Medlock capped off an 11-play, 85-yard drive with a six yard run that put VSU in front 17-14 at the half.

After fumbling on the VSU 1 yard line and recovering a Valdosta State fumble on the Blazer 32, North Alabama regained the lead five minutes into the second half when Wingo hooked up with Lamonte Thompson for a six yard scoring strike that put the Lions back in front, but Medlock ran for his second touchdown of the day on the next drive to give the Blazers a 24-21 lead.

Wingo’s third touchdown pass of the game put UNA back in front by four points before Pistelli kicked a career-best 52-yard field goal on the second play of the fourth quarter to pull VSU back to within a point.

Taylor Pontius scored UNA’s final points on a 27-yard field with 12:31 to go in the game while Pistelli added kicks of 32 and 18 yards to give the Blazers the victory.

Wingo passed for 511 yards in the game as he completed 30-of-37 passes, but his final pass of the game was intercepted by Kenny Murphy to allow the Blazers to run out the clock.

Austin Scott ran for a career-high 184 yards in the contest while Medlock, who completed 24-of-34 passes for 234 yards, also topped the century mark with 116. Cedric O’Neal just missed giving VSU three rushers with 100 yards as he finished with 96.

Donovan Bolden led the VSU receiving corps with eight catches for 81 yards while Tavaris Williams had a team-high 12 tackles. The Blazers tallied four sacks in the game and eight tackles for loss.

North Alabama finished the contest with 523 yards of offense, but managed just 12 yards on the ground, which led to a 34:48 to 25:12 in time of possession for Valdosta State.

Kickoff for next week’s game between the Blazers and Lenoir-Rhyne will be Noon.