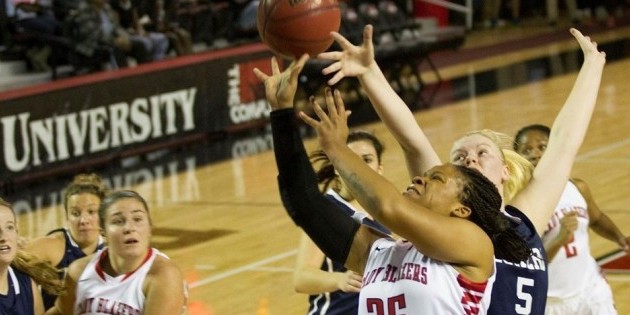 The contest contrasted greatly from Saturday night’s win for VSU over the same FVSU squad, as the Lady Blazers were outrebounded by the Lady Wildcats 54-35. The downgraded effort on the boards for VSU led to 19 second-chance points for Fort Valley State.

Valdosta State took the first lead of the night on two free throws by Maggie Davis at the 18:09 mark, but the Lady Wildcats answered and regained the lead after Carmenonique Dawson scored seven points to help fuel a 12-2 run.

Three different times in the first half, Valdosta State managed to whittle the deficit to just two points. But each time, the comeback attempt was thwarted by FVSU, thanks in large part to second chance opportunities for the Lady Wildcats that came by way of 23 offensive rebounds.

Imari Simpson posted a season-high 17 points on the night, while Amy Duke and April Thomas added 13 each and Maggie Davis reached double figures with 12 points. On the whole, however, the Lady Blazers were unable to find a rhythm on offense and shot just 34.5 percent from the field.

An 18.8 percent effort from long range hurt VSU as well, but perhaps the most damaging statistic was the team’s free throw percentage. The Lady Blazers were able to connect on 21 shots from the charity stripe, but 14 additional opportunities came up short, which resulted in a shooting percentage of 60 percent from the line.

The Lady Blazers denied a runaway victory for the Lady Wildcats with a late push in the final four minutes of the contest that narrowed a 15 point Fort Valley State lead down to six. The deficit proved to be too much to overcome, however, as FVSU managed to fend off the red and black to claim their first victory of the season.

Valdosta State saw their record fall to 1-2 after the loss, while Fort Valley improved to 1-2.

VSU will return to the friendly confines of The Complex on Thursday evening at 7:00 p.m. to host the visiting Lady Mocs of Florida Southern. The Lady Blazers are 11-3 all-time against Florida Southern, and defeated the Lady Mocs 67-63 in their last matchup, a contest which took place on March 10, 2012 in the semifinal round of the NCAA Division II South Region tournament.