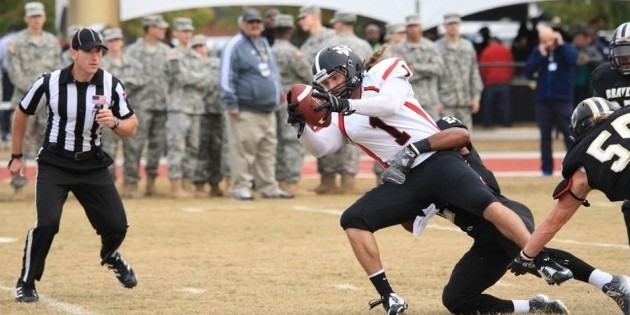 With the victory, Valdosta State improved to 7-2 on the season while UNC-Pembroke fell to 1-8.

Valdosta State dominated the first half of play as it raced out to a 29-0 halftime lead. The Blazers out-gained UNC-Pembroke 324 to 81 in the half.

The Blazers opened the scoring on their second drive of the game as it marched 56 yards on nine plays. Kaleb Nobles put VSU on the scoreboard as he lifted a pass over the fingers of a leaping Brave defender and into the hands of Shane Henderson for a 29-yard touchdown pass. A two-point attempt was no good to put VSU up 6-0 with 7:05 to play in the first quarter.

Anthony Pistelli added a 42-yard field goal just before the end of the first quarter for the Blazers before Henderson scored again on a 23-yard pass from Nobles three minutes later.

Valdosta State’s next score came from its defense as Rodney Hunter sacked UNCP quarterback Seth Owens, forcing a fumble in the process. Micaiah Satterwhite scooped up the fumble and returned it 21 yards for a touchdown that posted the Blazers to a 22-0 lead with 2:15 to go in the half.

After forcing a UNC-Pembroke punt, the Blazers converted one more time as Nobles drove the team 67 yards for a touchdown on a 15-yard pass to D’Amonte Ridley.

The Braves got on the board with 11:46 to play in the fourth quarter as it used a 11 plays to move the ball 80 yards. Reggie Pinner eventually found Jonathan Hough for a 32-yard touchdown pass to close the Braves to within 29-7.

Valdosta State immediately answered the score as Henderson pulled in his third touchdown catch of the game, on an 11-yard pass from Nobles.

Nobles completed 24 of his 38 passes for 308 yards and four touchdowns and also gained 22 yards on the ground. Austin Scott led the Blazer rushing attack with 62 yards while Cedric O’Neal finished with 59. Donovan Bolden had six catches for 80 yards while Henderson tallied five catches and 78 yards to go along with the three touchdowns.

Tavaris Williams had a team-high eight tackles for the VSU defense, which tallied four turnovers in the contest.

Valdosta State closes out its 2014 regular season next Saturday in Melbourne, Fla. as it takes on Florida Tech at 4:00 p.m. in Gulf South Conference action.