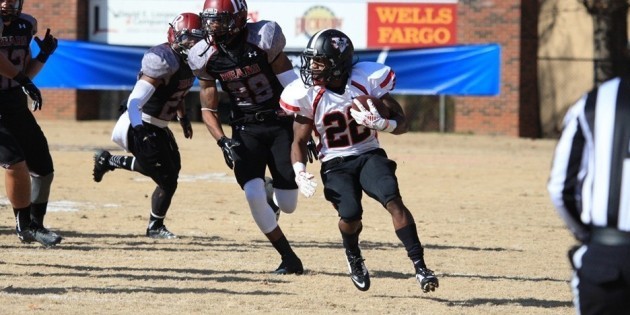 With the win, Valdosta State improved to 10-2 on the season and advances to next week’s Super Region 2 Championship Game against West Georgia. Meanwhile, Lenoir-Rhyne finished its season at 11-1.

Valdosta State got on the board first thanks to a Lenoir-Rhyne fumble on the first Bear drive of the game. The Blazers recovered the fumble on the LR 19 and picked up six yards on the first two plays of the drive before Jake Medlock was stripped of the ball on third down. The ball was kicked backwards on the play and VSU recovered on the LR 31, leading to a 48-yard field goal by Anthony Pistelli that put VSU in front 3-0 with 9:19 to go in the first quarter.

Lenoir-Rhyne gained the lead on a 29-yard touchdown run by Jarrod Spears with 11:01 to go in the third quarter while VSU turned the third LR turnover of the game, this one an interception by Kenny Moore, into a field goal on the final play of the first half to put the Bears in front 7-6 at the intermission.

After having to punt on the first drive of the second half, the Bears used a turnover to push their lead to 14-6. On a third down pass attempt by VSU, Chris Shaffer stepped in front of a Kaleb Nobles pass and returned it 28 yards for a touchdown to give Lenoir-Rhyne a 14-6 advantage.

Each team was forced to punt on its ensuing possession before the Blazers got in the end zone for the first time. Nick Burgman returned the LR punt 20 yards to the Lenoir-Rhyne territory. Six plays later, Cedric O’Neal scored from two yards out to close VSU to within 14-13 with 2:18 to play in the third quarter.

Valdosta State regained the lead with 12:15 to play in the game when Pistelli kicked his third field goal of the game, a 45 yard attempt. The field goal gave the sophomore 22 successful attempts on the season, which tied the Valdosta State single season record set by Will Rhody in 2004.

The fourth Lenoir-Rhyne turnover of the game led to another Blazer touchdown four minutes later as O’Neal scored on a 26-yard run. The Blazers got the ball on their own 49 when Isaiah Gresham stripped Bear quarterback Miles Freeman. VSU used eight plays to move the ball down the field, before O’Neal broke through an all-out blitz by the Bears for the score that put the Blazers in front 23-14 with 8:25 to play in the game.

Lenoir-Rhyne closed to within two points on Spears’ second touchdown of the game with 1:52 remaining in the contest, but the drive took more than five minutes off of the clock.

VSU recovered the onside kick, but was forced to punt just 27 seconds later to give LR one last chance. However, when a fourth down pass fell incomplete with less than 25 seconds remaining, the Blazers regained the ball and ran out the clock.

Valdosta State turned the five turnovers into 13 points in the game while an interception by Kenny Murphy in the end zone prevented seven more points for Lenoir-Rhyne. The five turnovers tied a season-high for the VSU defense, originally set in the season opener against Albany State on September 6.