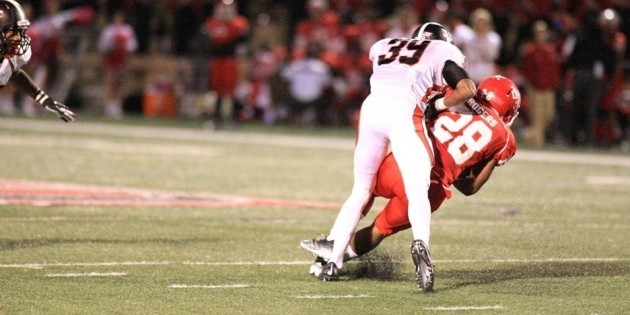 Valdosta State struggled moving the ball early in the game as it gained only 67 yards of total offense on its first three drives of the game. The Blazers best drive during that span came on its first possession as it gained 53 yards to move to the UWA 14 yard line before settling for a 31-yard field goal by Anthony Pistelli.

While the Blazer offense struggled moving the ball on its next two possessions, West Alabama moved the ball but had trouble putting points on the board. UWA appeared to crack the scoreboard on its third possession when Kyle Caldwell found Chad Toocheck on a screen pass that went 54 yards for a touchdown, but the play was nullified by a holding penalty on the Tigers. On its next possession, West Alabama moved to the VSU five before the drive stalled. Mark Grant evened the game at 3-3 with a 22-yard field goal to cap off the possession.

VSU finally got its offense in gear on its next possession as it marched 70 yards for a touchdown. The Blazers did much of their damage on the drive through the air as Jake Medlock completed all five of his passes on the drive to cover 42 yards. The senior quarterback also gained 19 yards on four carries before capping off the drive with a three-yard touchdown pass to Shane Henderson to give VSU a 10-3 halftime lead.

West Alabama took advantage of a Valdosta State fumble to tie the game at 10-10 four minutes into the second half. Following an Austin Scott fumble that was recovered by UWA on the Blazer 39, the Tigers picked up nine yards on a run before Caldwell found Toocheck on a 30-yard touchdown pass. The score marked the first touchdown the Valdosta State defense had allowed in more than 14 quarters, going back to the 5:28 mark of the fourth quarter of the Blazers’ game against North Alabama on September 27.

VSU quickly answered as it marched 65 yards to score less than three minutes later. The key play on the drive came when Donovan Bolden caught a short pass from Medlock and spun out of a tackle. As a second defender dove to tackle the sophomore wide receiver, he side-stepped the defender, who fell to the ground, allowing Bolden to gain 28 yards to the UWA 6. Two plays later, Cedric O’Neal scored from a yard out to put the Blazers in front 17-10 with 8:45 to go in the third quarter.

After blocking a 49 yard field goal attempt by West Alabama, Valdosta State stretched its lead to 24-10 with 11:44 to go in the fourth quarter when Jake Medlock, who missed the previous drive after being shaken up, connected with D’Amonte Ridley down the UWA sideline for a 56-yard touchdown pass.

After stopping a Valdosta State run on fourth-and-one from the UWA 10, West Alabama closed to within a touchdown on the ensuing drive as it covered 90 yards in just seven plays and 1:33 of clock. Caldwell opened the drive with a 19 yard gain on a scramble before using his arm to do the rest of the damage. The scoring play came when he hooked up with Daryl Collins from 22 yards out with 1:51 to go to close UWA to within 24-17.

The Tigers forced a VSU punt on the ensuing possession and moved the ball back into Blazer territory as it closed the Valdosta State 37. However, on a hail mary pass on the final play of the game, Donatello intercepted the ball to preserve the VSU win.

UWA out-gained Valdosta State 457 to 376 on the night. Medlock completed 19-of-25 passes for 226 yards and two scores and ran the ball for a team-high 55 yards. Kenny Murphy led the defense with 10 tackles.

Caldwell completed 24-of-48 passes for 337 yards in the game, including eight catches for 181 yards by Toocheck. Collins finished with 10 receptions for 115 yards.

Valdosta State returns to action next Saturday, November 8 when it steps out of GSC play as it travels to Pembroke, N.C. to take on UNC-Pembroke at 1:00 p.m.