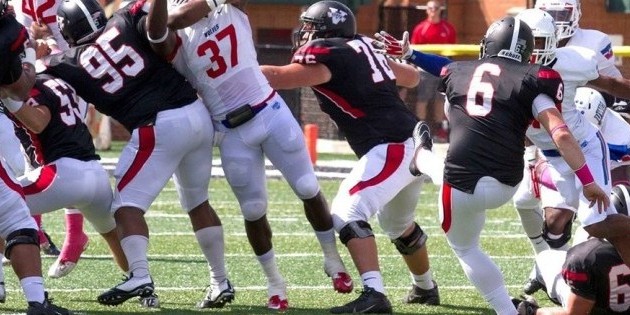 With the victory, Valdosta State, which played its fourth straight ranked opponent and snapped a two-game losing streak, improved to 3-2 overall and 1-2 in Gulf South Conference play while West Georgia fell to 5-1 and 1-1 in league action.

The Wolves actually controlled the first quarter of the game, during which each team managed only a field goal. UWG took the opening kickoff and marched 61 yards before settling for a 22-yard field goal from Hunter Heck while VSU responded with a 48-yard kick from Anthony Pistelli on its ensuing possession. West Georgia ended the first quarter with a 110 to 83 advantage in total yards and a 11:02 to 3:58 edge in time of possession before Valdosta State took over the rest of the game.

The final three quarters of the contest saw the Blazers dominate in every way as  the VSU Black Swarm defense forced West Georgia to punt on eight straight possessions while Valdosta State scored on eight of its first nine drives, including the first quarter field goal.

Pistelli put VSU in front with his second 48-yard field goal of the game just seven seconds into the second quarter before Jake Medlock connected with Donovan Bolden for a 68-yard scoring strike on VSU’s fourth possession of the game. Pistelli added a 20-yard field goal with 37 seconds to go in the first half to establish a 16-3 Blazer halftime lead.

Valdosta State was especially dominant during the third quarter of play, during which it scored 10 more points, out-gained UWG 195-14, tallied 13 first downs while limiting the Wolves to just one and held an 11:16 to 3:44 advantage in time of possession. Pistelli opened the quarter’s scoring with his fourth field goal of the game, a 41-yard attempt, that capped of a 51-yard drive that opened the quarter. Meanwhile, after a West Georgia punt, Medlock threw his second touchdown of the game when he foundD’Amonte Ridley from six-yards out to finish off a 10-play, 69-yard drive that gave the Blazers a 26-3 lead with 4:17 to go in the quarter.

Medlock, who finished the game with more total yards than the West Georgia team as he ran fro 145 yards and passed for 231, had a hand in two more VSU touchdowns in the fourth quarter before being pulled from the game. On the first, he connected with Chirs Anderson from 19-yards out to put the Blazers in front 33-3 just seconds into the final quarter before capping off another drive with a two-yard touchdown run. The quarterback from Jacksonville, Fla. set up his short touchdown run when he kept the ball on a zone read play and ran 52 yards before being tackled at the West Georgia two yard line.

Heck closed out the game’s scoring as he kicked a 37-yard field on West Georgia’s final possession of the game.

Against a West Georgia defense that was ranked fifth in the nation in total defense as it allowed only 233.2 yards per contest entering the game, Valdosta State tallied 586 yards of total offense, including 503 in the final three quarter of play. Meanwhile, the VSU Black Swarm defense held the Wolves, who averaged 406.2 yard of offense entering the game, to just 261, only 151 of which came in the final 45 minutes of play.

While Medlock recorded his first 100-yard rushing game, Austin Scott topped the 100-yard mark for the eighth time in his career as he finished with 135. Overall, VSU ran for 351 yards despite being without leading rusher Cedric O’Neal for much of the game after the junior exited after only one carry for a loss of three yards early in the first quarter.

Brandon Brown led the Valdosta State defense with nine tackles, including a sack while Bobby Liggins had 10 tackles to lead West Georgia.

Valdosta State returns to action next Saturday when it travels to Clinton, Miss. to face Mississippi College at 4:00 p.m. in a Gulf South Conference match-up.