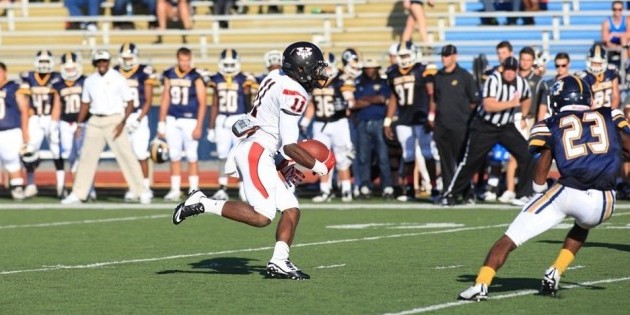 With the win, Valdosta State improved to 4-2 overall and 2-2 in GSC play while Mississippi College fell to 1-5 and 0-3.

After punting on its first drive and fumbling in the end zone on its second drive, Valdosta State scored on each of its last five possessions of the first half to build a 35-0 halftime lead.

On the third VSU drive of the game, Jake Medlock capped off a six-play, 80-yard drive with an eight-yard scoring run for the first points of the game. After forcing a Mississippi College punt, the Blazers again marched the length of the field to go in front 14-0 when Cedric O’Neal scored on a six-yard run with 13:09 remaining in the second quarter.

The third Valdosta State score of the game just over four minutes later when Austin Scott scored on a five yard run while Medlock threw for the final two scores of the half, the first on a 13-yard pass to Donovan Bolden while the second came with 1:09 to go in the half when he connected with Shane Henderson on a 51-yard pass.

Valdosta State continued its scoring streak on its first four drives of the third quarter as Medlock connected with Chris Anderson on a seven-yard pass before exiting the game. Kaleb Nobles came in the game on the ensuing drive and directed a 7-play, 52-yard drive that ended with an 11-yard scoring run by Nick Davis. Eric Scott became the eighth Blazer of the day score on VSU’s third drive of the game when he ran from eight yards out a drive later.

While the Valdosta State offense clicked off touchdowns, the Black Swarm defense was just as effective as it did not allow Mississippi College past the 50 yard line until MC’s 11th drive of the game. The Choctaws also crossed the 50 on their 12th drive, but did not get inside the Blazer 36 yard line during the game.

Medlock completed 19-of-20 passes in the game to set a new Gulf South Conference single game record for completion percentage at 95.0 percent. He passed for 248 yards and three touchdowns while also rushing for 35 yards and a score. O’Neal finished the game with 107 yards and a score on 11 carries while Austin Scott carried the ball eight times for 43 yards and a score. Bolden led the Blazer receivers with seven catches for 64 yards.

Valdosta State topped the 600-yard mark in total offense for the second straight week as it tallied 651 in the contest, including 344 rushing and 307 through the air.

Kenny Murphy led the VSU defense with seven tackles in the contest. The shutout marked the first for the Black Swarm since stopping Shorter 41-0 on September 21, 2013.

Valdosta State returns home next weekend for its final home contest of the 2014 regular season. The Blazers will play Shorter in a Gulf South Conference contest at 3:00 p.m. at Bazemore-Hyder Stadium. In addition to the VSU seniors being honored prior to the game, the contest will also feature Valdosta State’s Homecoming game.