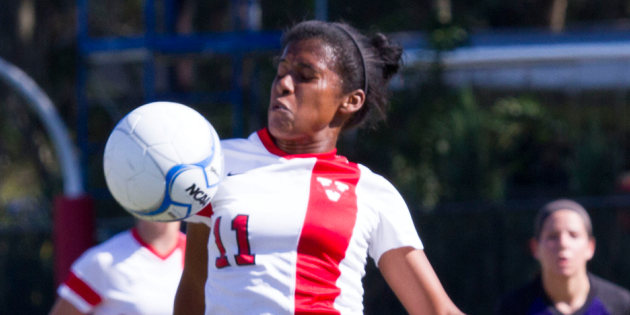 CLEVELAND, MS – While VSU football was being handled by Delta State in Valdosta, the women’s soccer team was taking care of business in Mississippi.

Margaret Stauffer and Zahimara Fantauzzi teamed up for a pair of goals that helped the Blazers build on their recent success, with a 2-0 shutout of the Delta State Lady Statesmen in Gulf South Conference women’s soccer action on Sunday afternoon in Cleveland, Miss..

The win marked the second straight for the red and black and moved the Blazers up to a 2-3 mark on the young season. Valdosta State’s league record remained untarnished after the victory, as the Blazers now stand at 2-0 against league opponents. For the Lady Statesmen, the team saw their overall record fall to 1-5 overall, 0-3 against GSC opponents.

“The past couple of weeks, we’ve really tried to work on our style of play and tweak some things in certain areas, and it’s beginning to show,” said Head Coach Rebecca Nolin. “We have started conference play very well with two wins and will continue to build this week to prepare for Shorter on Friday.”

Both Stauffer’s goal in the first half and Fantauzzi’s successful attempt in the second half came by way of well-placed crosses off the foot of Abbi Edwards. Thanks to the shutout effort by Blazer keeper Olivia Mills, the score by Stauffer early in the contest at the 11:32 mark was all the Blazers would need. Fantauzzi’s insurance goal in the 74th minute helped ease the pressure for Valdosta State, as did a stellar diving save by Mills to deny an opportunity by DSU’s Erin Tucker.

“It was a great win for us today after a quick turnaround from Friday and a very long road trip to Mississippi,” added Nolin. “We knew we had a tough game ahead of us against a well-organized Delta State team, but our girls worked very hard and well as a team. Plus, everyone who travelled got minutes, which is always great. Margaret and Zahimy had two very nice goals after two great crosses from Abbi.”

As a team on the afternoon, VSU was successful in applying steady pressure on the Delta State defense. The Blazers outshot the Lady Statesmen 11 to six, while six of Valdosta State’s shot attempts were on goal. In contrast, only two of DSU’s shots were on goal in the match.

The Blazers continue their early season cluster of road matches with a trip to Rome, Ga. next Friday to face the Shorter Hawks. The September 26th contest is set to begin at 2:00 p.m..