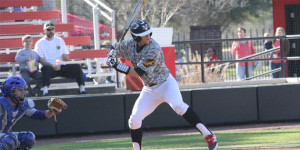 Valdosta State (14-4, 7-4) jumped out to an early lead as the first four batters of the game collected a hit. Matthew Fears opened the game with a first-pitch single before Mike Reed also collected a base hit. Bryant Hayman followed with a double that plated Fears while Jimmy Dowdell singled home Reed. After a ground out moved Dowdell to second, Kevin Cruz collected a base hit that scored both base runners to put VSU up 4-0 after the top of the first inning.

North Alabama (7-15, 2-10) got a run back when Bradley Noland singled and scored on a wild pitch before scoring two more runs in the bottom of the third inning to move to within a run. Both UNA runs in the third inning came via a two-out error as the Lions did not record a hit in the inning, but Thomas Lundborg reach when he was hit by a pitch and Jake Ward draw a walk before both scored on an errant throw by Michael Gouge to cut the VSU advantage to 4-3.

The Blazers got a run back in the top of the fourth as Kevin Cruz doubled to open the inning and scored three batters later when Dominique Smedley grounded out.

The Lions closed out the scoring in the bottom of the seventh inning as it again scored a run without the benefit of a hit. With one out in the frame, Brett Guzay was hit by a pitch and moved to both second and third on wild pitches. A sacrifice fly brought him home to cut the VSU lead to 5-4.

UNA got the winning run on base in the bottom of the ninth inning as, after two outs in the frame, Guzay singled to left and Kyle Conkle walked. However, Jarod Stanley came out of the bullpen and induced a ground out to end the game and record his second save.

Dom DeMasi improved to 3-2 as he gave up three hits and four runs, only two earned, in 6.2 innings of work. DeMasi struck out four and walked four in the game while throwing five wild pitches.

Conkle started on the mound for the Lions and surrendered seven hits and all five Blazer runs in 4.0 innings to fall to 0-2. The UNA bullpen kept the game close as it allowed just two hits, one in the eighth and one in the ninth, to Valdosta State in the final five innings.

Valdosta State remains on the road as it travels to Saint Leo on Tuesday for a 6:00 p.m. first pitch.