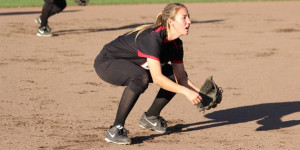 VALDOSTA, GA – Blazer softball return home this evening to Steel’s Diamond at Blazer Park for a double header showdown against the Bearcats of Lander University.

The Bearcats, who hold a 6-14 record on the year, enter the pair of today’s games looking to snap a two game losing streak, while the Blazers will aim to build on their 18-8 record and a recent Gulf South Conference win over North Alabama in Florence, Ala. on Sunday afternoon.

Valdosta State fell in two out of three on the weekend to UNA and scored just two runs in two games, as the team struggled to string together any semblence of an offensive attack on Saturday. The Blazers turned things around in a big way on Sunday though and came together to plate nine runs in the final game of the series. Fran Johnson and Shelby Altman served as the driving force behind hitting surge for Valdosta State, as Johnson drove in two and Altman blasted a first inning grand slam.

Lander has seen hard times at the plate this year and have just one player, Reychel Webster, who is hitting above the .300 mark. As a team, the Bearcats are hitting just .211 after having tallied 20 games played thus far. Supplying the power in the lineup for the team out of Greenwood, S.C., is junior Aubrey Lamar. The North Augusta native has tallied four doubles and three homers on the year to account for seven of her sixteen hits.

In contrast, Valdosta State features seven players above that same .300 mark and has seen that same number of players connect for at least one long ball this year. The group will face the challenge of a Lander pitching staff that has posted a team ERA of 3.07 so far this year, despite the fact that they have collectively won just six games.

Valdosta State and Lander have met seven times in the history of the two programs, and the Blazers have won each of those contests. Their last meeting came on February 24, 2013, when Valdosta State claimed a 1-6 win. Hannah Strickland, Karson King, Courtney Albritton, and Johnson all posted RBI’s in that contest to help lift the Blazers to victory.