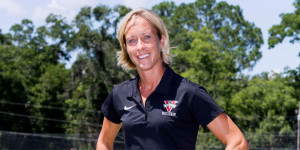 VALDOSTA, GA – After three years at the helm of the Valdosta State Soccer program and 19 years in the collegiate coaching ranks, Melissa Heinz announced Tuesday that she is leaving VSU to pursue an alternate career path.

Afforded the chance to work with her brother, who is currently self-employed in the Atlanta area, Heinz found the opportunity impossible to resist.

“This is a leap of faith for me, but I have spent much time praying about this decision, and I have peace about it,” said Heinz. “My brother’s two-year business is growing, and I will be taking over the sales and account management duties of the business.”

Heinz, who was brought on as the head coach for the Valdosta State soccer program prior to its inaugural season in 2011, leaves the team in a great position to continue the success that the program has enjoyed during her three-year reign.

“Coach Heinz certainly proved to be the perfect person to start our program and serve as our first coach,” said Blazer Athletic Director Herb Reinhard. “The success that we have had in our first three years has been, quite simply, unbelievable. Mel has provided us with a tremendous foundation that we will work to build on.”

During the first three years of VSU soccer, Heinz led the team to a 33-16-7 record, two appearances in the NCAA Tournament and one appearance in the Gulf South Conference Championship match. In her first season at the helm, Heinz was named the GSC Coach-of-the-Year and, in her three years, groomed ten players to All-GSC noteriety. In addition, she had players earn 27 All-Academic honors.

Reflecting on her time at Valdosta State, Heinz commended the Valdosta community for their sustaining support of VSU Soccer.

“Many times a community will jump on board with a new program, but support will degrade over time. That didn’t happen here,” Heinz stated. “This community has helped VSU Soccer grow, and that has been exciting to be a part of.”

She also referenced the staff and administration at Valdosta State as part of her support system during her time with the Blazers.

“Herb was a big reason why I chose to take on the challenge of starting the program here at Valdosta State. The opportunity to work for and with him, Coach Jennifer Grubbs and Debi Frocks has been the ultimate pleasure.”

In a sentiment shared by the VSU Athletic Staff, Reinhard expressed his feelings about Heinz’ departure. “We are saddened that Mel will no longer be a part of our team. However, I understand and respect her decision to change her career path. She has done a wonderful job while at Valdosta State, and we wish her well.”

Heinz made special mention of the significance of the roles that her players have played during her success at Valdosta State.

“I feel that I’ve been able to be a good coach because of my players. I give a lot of credit to those ladies, because they challenged me and made me want to work hard for them. No matter who is coaching here in the future, the players will be the key factor moving forward. I am confident that the student-athletes will continue moving this program to new heights.”

Valdosta State will begin a national search for Heinz’ replacement in the coming weeks.