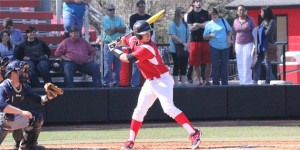 The complete game effort by DeMasi was his the first of his career as he pitched a career-best nine innings and tied a career-best with nine strikeouts. He surrendered just five hits in the game, including only two after the Bucs tallied three hits and scored two runs in the top of the first inning.

Christian Brothers (6-20, 1-14) tallied a pair of doubles in the opening inning to grab an early lead. Tyler Burnett doubled to open the game and scored two batters later when CBU starting pitcher and designated hitter Mac Cooley hit a sacrifice fly. Charles Kelly followed with a double and scored as Josh Hopkins singled to put the Bucs in front 2-0.

Valdosta State (17-8, 10-6) answered with two runs in the bottom of the inning. With one out in the frame, Matthew Fears doubled and Hayman was hit by a pitch. After a ground out moved both base runners up a base, Kevin Cruz singled to score both Fears and Hayman and knot the game at 2-2.

CBU threatened in the third as a walk and a double put runners in scoring position with only one out, but DeMasi got a pop up and struck out Kelly to end the inning. The Bucs also got two runners on via walks in the fifth before DeMasi again pitched out of the jam. The junior proceeded to retire 10 straight batters, a streak that stretched to the first batter in the top of the ninth inning.

While DeMasi squelched the Buc bats, Cooley matched him through the seventh inning before Hayman hit a 1-0 pitch over the wall in right-center with one out in the eighth inning. DeMasi made the run stand up as he gave up a single to open the ninth inning, but retired the next three batters, including a strike out of pinch-hitter Josh Ambuehl to end the game.

Hayman was 2-for-3 with two runs scored and one driven in to lead Valdosta State on the day. DeMasi picked up his fourth win of the season, against just two losses.

Cooley surrendered six hits and three runs in a complete game as he fell to 0-3.

Valdosta State returns to action Tuesday when it travels to Albany, Ga. to take on Albany State at 5:00 p.m.