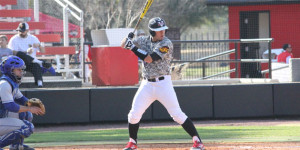 After Valdosta State reliever Mitch King struck out Lorenzo Butler to open the Saint half of the 11th, Vanover lifted a 1-1 pitch over the wall in left-center to end the game.

Valdosta State (15-7) raced out to a 3-0 lead in the top of the second inning. With one out in the frame, Michael Gouge doubled and scored when Matt Fitzsimmons hit a two-out single.Hunter Thompson, who entered the game having not hit a home run in 200 career at-bats, followed with a round shot over the wall in left field to pace the Blazers to their three-run lead.

Flagler (15-10) got a run back in the bottom of the second while each team added runs in the third inning. The Blazers added two more runs, including a Jimmy Dowdell RBI single, in the fifth before pushing their lead to 8-2 in the top of the sixth.

Matthew Fears went 2-for-4 with two runs scored to lead the Blazers while Casey Kicklighter and Fitzsimmons were each 2-for-2. Thompson also finished the game with two hits as well as two runs driven in.

King allowed two hits and struck out two in 1.1 innings to fall to 0-1 on the season.

Valdosta State’s game at Thomas on Wednesday was cancelled earlier on Tuesday due to wet field conditions in Thomasville. The Blazers return to action this Saturday at 1:00 p.m. when they open a three-game Gulf South Conference series against Christian Brothers. The two teams play a doubleheader on Saturday followed by a single game at 1:00 p.m. Sunday.