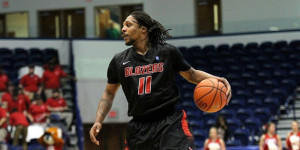 BIRMINGHAM, AL – The Valdosta State men’s basketball team came to Birmingham, Ala. with a No. 7 seeding and an apparent chip on their shoulder, as the Blazers put together one of their most impressive offensive outings of the season to upset the No. 2 West Alabama Tigers 84-71 on Thursday night in the first round of the Gulf South Conference Tournament.

The win boosted Valdosta State’s record to 16-11 on the year and advanced the team to the second round of the tournament, where they will face the winner of No. 6 West Georgia and No. 3 North Alabama, who are scheduled to play on Friday. The Tigers, who were eliminated from the tournament with the loss, fell to 17-10 overall.

“It’s really all about finding the next guy and the next pass, and our guys have really bought into that lately,” said Head Coach Mike Helfer. “We came into this game the way we did during last year’s tournament. We just wanted to not look ahead and concentrate on playing hard for 40 minutes. No matter the situation, you’ve got to get it done after the horn sounds, and our guys did that tonight.”

The Blazers were unconscious from the field throughout the duration of the contest, as they hit more than half of their attempts on the night, shooting 50.9 percent on a 28-for-55 effort. Perhaps even more impressive for the red and black, was the team’s 10-for-20 performance from long range.

David Murray opened up the scoring in the game with two free throws after he was fouled by Demetrius Powe within the first fifteen seconds of the game, but the Tigers quickly flipped the momentum with a 12-2 run over the course of the next six minutes.

The Blazers bounced right back, however, with a 14-3 run of their own that pushed Valdosta State out in front 18-15 with 11:21 to play in the first period.

For the remainder of the opening half, Valdosta State shot as well as they have all season long with a 43.8 percent effort from the field, and a 53.8 shooting percentage from beyond the arc.

Although the Tigers answered the Blazers’ blows throughout the first half with an equally efficient shooting performance, Valdosta State went to intermission with a 41-38 lead after Larry Stone and Jeremy McKay put on a show from beyond the arc with six three pointers in just nine attempts. The pair accounted for just under half of the Blazers’ 41 first period points.

Stone’s 4-of-5 three point shooting set the tone for the Blazers in the first half and accounted for 12 of the guard’s 20 points on the night. “This was a great team win tonight,” said Stone. “We picked the right time to come together as a team. There were times we could have broken down out there, but we just kept telling each other ‘next play, next play, next play.'”

In the second half, the Tigers struck first with a 15-footer by Powe, but Jalen Crawford retaliated immediately with a pretty runner from close range. Both teams continued their hot shooting and traded baskets for the next four minutes before Powe hit a layup as he was fouled. Although Powe missed on the attempt to complete the three-point play, the basket gave  West Alabama their first lead since the 12:22 mark in the first half.

The Blazers immediately reclaimed a 49-48 lead on the next possession, thanks to a point blank bucket by Colin Cook. Lester Moore hit his first three of the night just a few possessions later to put Valdosta State on top 53-50, but VSU allowed the Tigers to tie the contest up when Stone fouled Desmond Raymond as he hit a layup. Raymond converted the attempt and knotted the match back up at 53-53.

Sandy Underwood hit a layup to give the Tigers their third lead of the game before the Blazer defense put together a gutsy defensive stretch that held the Tigers scoreless for seven straight minutes. During that span from the 13:42 to the 6:39 mark, the Blazer offense put up 14 points and spread the Valdosta State lead to 67-55.

The stretch was one that proved to be deadly for the Tigers, as the Blazers never allowed West Alabama any closer than nine points and closed out the night with the 13 point advantage.

McKay led the way for the Blazers with 22 points, while Murray added 12. In addition, Cook came up one basket short of a double-double, as he finished with a team high 11 rebounds to go along with eight points.

The Blazers now must await the decision of their next opponent, who they will face on Saturday night at 8:30 p.m. EST.