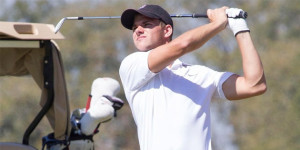 VALDOSTA, GA – Barry shot a final round 289 to win the First Federal Southeastern Collegiate with a three-round total of 861 at the par 72, 7,113 yard Kinderlou Forest Golf Club Tuesday.

For the Blazers, John Fordham and Florian Schmiedel, both of home shot 73 in the final round, tied for ninth at 217 while Michael Nutter was three-over Tuesday and six-over for the tournament to finish tied for 25th. Alex Jones was also three-over in Tuesday’s round and tied for 32nd with 223 while Austin McNeill was tied for 59th at 14-over after a final round 76.

Valdosta State returns to action next Monday when it opens play in the Bobcat Invitational at the Golf Club at Cuscowilla in Eatonton, Ga.