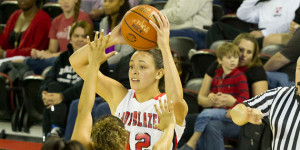 VALDOSTA, GA – Despite a double-double from Amy Duke and a 17 point effort from April Thomas, the Valdosta State Lady Blazers fell victim to a three point buzzer beater by the West Georgia Wolves and fell 59-62 in Gulf South Conference women’s basketball action Thursday night at The Complex.

The basket from Thomas sparked a 12-0 run for the Lady Blazers that boosted the team to a 26-20 lead with 3:59 remaining in the half. Although the Wolves finished the half with a 6-2 run, Valdosta State still held a 28-26 advantage at halftime.

Both teams exchanged baskets for the first five minutes of the second half before the Wolves reclaimed the lead on a Seandre Lee layup at the 14:31 mark.

The Lady Blazers tied the game up six different times throughout the remainder of the contest and knotted the game up at 59-59 after Kourtnee Williams buried two free throws with only 17 seconds to go.

West Georgia inbounded the ball and brought it down for the final shot attempt and worked it around the perimeter before the ball ended up in the hands of Nicole Fasick, who buried a three ball at the final horn to give the Wolves the three-point win.

The shot was the most recent of three game winners that the Wolves have hit in the month of February. The team knocked off nationally ranked Delta State back on February 6th with a three pointer by Shakiyla McLin, and McLin struck again in Livingston with a Valentine’s Day buzzer beater that lifted the team to a 60-57 win over the Tigers of West Alabama for the Wolves’ first road win of the season.

Thomas led the Lady Blazers with 17 points, and Duke’s 12 boards and 16 points gave her the first recorded double-double for a Lady Blazer this year.

Both Duke and Jordan Waugh reached double digit figures in the rebounding column. Prior to the contest, no Lady Blazer had pulled down more than nine rebounds in one game on the year.

Valdosta State closes out their home schedule on Saturday at The Complex for senior night against the Shorter Hawks. The men’s and women’s double header kicks off at 6:00 p.m., and will feature special recognition of all of the Lady Blazer and Blazer seniors prior to each game.