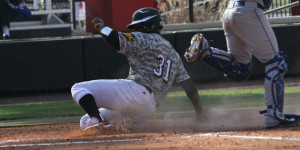 Valdosta State (9-0, 3-0) got all the runs it needed in the bottom of the second inning when it plated five runs on just three hits. With one out in the frame, Kevin Cruz doubled beforeMichael Gouge and Matt Fitzsimmons walked to load the bases. Cooper Lemonds also walked to score Cruz and, after a fly out, Gouge scored on a balk, before Matthew Fears singled home both Fitzsimmons and Lemonds. After Fears stole second, Reed singled him home to put VSU in front 5-0.

The Blazers added two more runs in the fourth as Hunter Thompson opened the inning with a single, stole second and scored on a one-out single by Reed. Two batters later, Jimmy Dowdell doubled home Reed to put Valdosta State in front 7-0.

VSU closed out the scoring in the fifth when Reed drew a bases loaded walk to drive home Lemonds before Bryant Hayman doubled to clear the bases.

Jarod Stanley pitched five innings and gave up five hits and three walks while also striking out three to improve to 1-0 on the season. Thompson also had two hits in three at-batson the day while Hayman finished with three RBI and Fears two.

Travis McPherson surrendered two hits, three walks and five earned runs in 1.2 innings to fall to 0-2 on the season. Dylan Riner had two of Shorter’s five hits in the game.