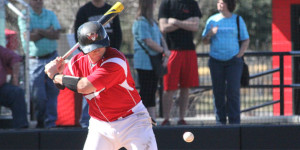 Valdosta State (6-0) opened the scoring in the bottom of the first inning as it plated a pair of runs. Matthew Fears opened the inning with a walk and moved to third when Mike Reedsingled off the glove of ASU starting pitcher Clifford Peterson. Two batters later, Jimmy Dowdell hit a sacrifice fly to score Fears while Michael Gouge singled home Reed to put the Blazers in front 2-0.

VSU added two more runs in the second, including a run-scoring, two-out double by Hayman, as well as two unearned runs in the third to push its lead to 6-0.

The Blazer lead grew to 8-0 in the sixth inning as Kevin Cruz scored on a passed ball and Clint Carr singled home Gouge, but Albany State (2-5) got two runs back in the top of the sixth when Jon Paul Bernard singled home Sable Gilliard and Allen Hardy.

Valdosta State put the game out of reach with seven runs in the bottom of the sixth inning, including a two-run double by Hayman, while ASU added a run in both the seventh and ninth innings as well as three in the eighth.

Beau Blair pitched two innings in relief and allowed three hits and two runs to improve to 1-0 on the season.

Bernard was 3-for-3 to lead Albany State offensively while Peterson surrendered five hits and six runs, two earned, in 2.0 innings to fall to 0-1.

Valdosta State returns to action and opens Gulf South Conference play with a three-game series this weekend against Shorter at Billy Grant Field. The two teams will play a doubleheader beginning at 1:00 p.m. on Saturday followed by a single game at 3:00 p.m. on Sunday.