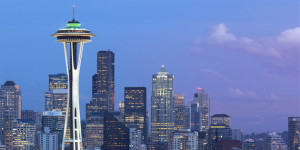 The Seattle Seahawks won their first Super Bowl in franchise history on Sunday with a staggering 43 to 8 win over the Denver Broncos.

The “Legion of Boom,” as the Seattle defense calls themselves, never let Peyton Manning get going during the game. At 12 seconds into the game Seattle led 2-0 after a safety, the quickest score in Super Bowl history. The remainder of the game did not look promising for the Denver Broncos.

By half-time, the Seahawks were up 22-0, and to begin the second half, Seattle’s Percy Harvin ran back an 87-yard kickoff to tack on seven more points for the Seahawks. Seattle continued to dominate the field through out the second half, only allowing one touch down late in the third quarter.

The Seahawks are the first team to win a Super Bowl without a player who previously appeared in the championship game since the 1982 Washington Redskins. Seattle’s average age of 26.4 makes them the youngest team to win the Super Bowl, according to the Pro Football Reference.