Home /Latest News/VSU Baseball Falls 5-1 and 3-2 to No. 2 West Florida
Share with friends 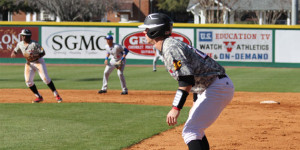 PENSACOLA, FL –  No. 2 West Florida scored five unanswered runs in the first game and the final three runs of the second game to sweep a Gulf South Conference baseball doubleheader from No. 4 Valdosta State 5-1 and 3-2 at Jim Spooner Field Saturday.

Valdosta State (10-2, 3-2) got on the scoreboard first in the first game as it scored a run the top of the first inning. Matthew Fears doubled to open the game and, after a sacrifice bunt byMike Reed, scored when Bryant Hayman hit a sacrifice fly for a 1-0 VSU lead.

West Florida (10-2, 5-0) evened the game with a run in the bottom of the first inning when Cliff Covington singled home Aaron Haag, and added two more runs in the second inning to take the lead.

Chase Kiefer singled to open the Argonaut half of the second and moved to second on a ground out before Andrew Greene was hit by a pitch. A ground out moved both runners up a base, allowing both to score when Kaleb Barlow singled to put UWF in front 3-1.

The two teams played scoreless for the next four innings until Kaleb Barlow singled home Trumon Jefferson in with one out in the bottom of the seventh while Haag stole home with two outs in the inning.

Blazer starter Dom DeMasi  went 6.1 innings and allowed six hits and four runs while striking out five to fall to 2-1 on the year.

In the second game, the Blazers again jumped out to an early lead as they scored two runs in the third inning. With one out in the frame, Hunter Thompson reached on a bunt single and moved to third as Fears followed with a double. A Reed ground out plated Thompson while Hayman drove in Fears with a two-out single that put VSU in front 2-0.

The Blazer lead stood until the bottom of the sixth inning when Barlow reached on a one out single. Ethan Bornstein relieved Blazer starter Josh Mann and was greeted by a home run down the right field line by Covington, which tied the game at 2-2.

The Argonauts sealed the sweep in the seventh when Garrett Flynn was hit by a one-out pitch from Bornstein before being lifted for pinch runner Sean Plunkett. A base hit and a walk loaded the bases before Haag hit a chopper past a drawn in infield to plate Plunkett for the winning run.

Bornstein fell to 0-1 on the season as he allowed four hits and two runs in 1.0 inning of work. Mann surrendered just one run on five hits in 5.1 innings in a no decision.

Fears led VSU offensively on the day as he had five hits in eight at-bats while Matt Fitzsimmons finished the day with three hits.