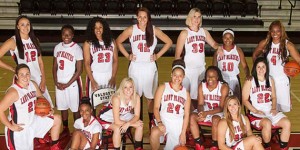 VALDOSTA, GA -The Lady Blazers open up the first of two home games this week at The Complex on Thursday night, as North Alabama comes to town sporting a 12-8 record on the season and a 7-7 record in the Gulf South Conference.

The Lions most recent effort was an 80-59 victory over West Georgia on Monday night in Florence, Ala.. The win was North Alabama’s ninth of the season on their home flooragainst only two losses.

The Lions’ success at home thus far is undeniable, but road play has been a different story for UNA this year. When competing on an opposing team’s floor, the Lions have won only two games on the year. The note is a favorable one for Valdosta State when considering that the Lady Blazers home record this year stands at 7-3.

In Valdosta State’s previous matchup with the Lions, which took place when VSU traveled to Florence just over one month ago on January 9, the Lady Blazers came up just short in a 49-51 loss.

It was a tightly contested matchup throughout and featured five lead changes and three ties in the final ten minutes. Although they were unable to convert the attempts, the Lady Blazers had an opportunity to tie the contest up from the free throw line within the final seconds of the game.

Reshaundra Owens just missed a double-double in that outing with ten points and eight rebounds, while Kamyia Smith led the way offensively with 11 points and three assists.

The Lady Blazers’ defensive effort in the previous battle with UNA was one of VSU’s best of the season. Valdosta State held the Lions to nearly 20 points fewer than their season average of 70.2 points per game. More specifically, Valdosta State locked down UNA’s leading scorer Jennifer Towne, holding the North Alabama guard to her lowest point total in one game this season with just five points. On the year, Towne is averaging 15.7 points per game.

The Lady Blazers enter Thursday night’s contest on the heels of a road trip split that included a win over West Alabama one week ago, followed up by a tough loss to the Lady Chargers of Alabama-Huntsville on Saturday.

Injuries have shaken things up for the Lady Blazers in the past week, resulting in a return to the starting lineup for Courtney Sprague and Ivana Domljanovic. Head Coach Kiley Hill will certainly be counting on a balanced effort from his squad on Thursday night to slow down North Alabama, who is one of the top offensive teams in the league.