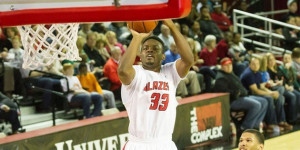 VALDOSTA, GA – Valdosta State begins its final home weekend of the 2013-14 season as the Blazers welcome in-state rival West Georgia to The Complex Thursday at 8:00 p.m.

Valdosta State enters the game with a 13-9 record and a 7-9 mark in GSC play. The Blazers average 77.4 points per game and shoot 42.0 percent from the field, including 34.7 percent from three-point. The Blazers are currently second in the Gulf South Conference in fewest turnovers per game as they give the ball up just 11.4 times per game.

On the season, Jalen Crawford leads VSU with 13.8 points per game and in assists with 58. Justice adds 13.1 points per outing and Mckay 12.9 while David Murray averages 11.7 points and 9.1 rebounds an outing.

Its been a tale of two years for West Georgia as the Wolves won 10 of their 11 games in November and December and jumped into the NABC national rankings, only to drop eight of 14 games since the calendar turned to 2014.

West Georgia averages 73.1 points a game and hold opponents to just 70.4. Much of UWG’s success can be attributed to its defense as the Wolves have forced opponents into nearly 17 turnovers a game while recording nine steals per outing. Eight different UWG player have tallied double-digit steals on the season. However, West Georgia struggles shooting the ball as it is hitting just 42.1 percent from the field and 63.0 percent from the free throw line. The Wolves are also foul-prone as they commit more than 21 fouls each game.