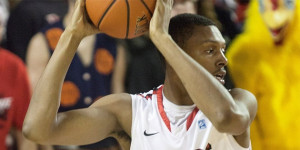 Valdosta State (14-9, 8-9) raced out to an early lead as it made nine of its first 14 field goals of the game. The Blazers never trailed during the first half as they scored the first five points of the game and built a 13-5 advantage less than four minutes into the contest behind four points from both Colin Cook and David Murray. West Georgia (16-10, 8-9) rebounded to score the next four points of the game, but VSU kept up the strong shooting as it pushed its advantage to 19-10 on a Breon Dixon tip-in with 12:50 to play.

Valdosta State’s lead grew to as much 14 points twice during the first half, the last coming on a pair of Blake Justice free throws with 5:39 to go in the frame that put the Blazers in front 32-18. However, the Wolves closed the half on a 10-3 run to cut their deficit to 35-28 at the intermission.

Valdosta State quickly built its lead as its advantage reached 20 points, at 55-35, six minutes into the second half before using a 21-3 run over a five minute span to grab its largest lead at 80-46 with 4:01 remaining in the contest.

Murray and Cook each tallied double-doubles as Murray, who registered his ninth double-double of the season, had 13 points and 10 rebounds while Cook finished with 12 points and 12 boards. Jeremy McKay led VSU with 18 points while Blake Justice Jalen Crawford had 14 each. Crawford also dished out six assists in the game while Justice had a career-best four steals.

Valdosta State made 30 of its 54 field goal attempts in the game, including 11-of-22 three-pointers, and out-rebounded West Georgia 41-33. The Blazers dished out 16 assists as a team while blocking six shots and tallying 11 steals.

Deonta Stocks scored 14 points to lead West Georgia while Phillip Flowers had 11. The Wolves made 19-of-61 shots to shoot 31.1 percent.

Valdosta State returns to action Saturday, February 22 when it hosts Shorter at Gulf South Conference action at The Complex beginning at 8:00 p.m. VSU’s two seniors will be honored prior to the game, which is the Blazers final home game of the 2013-14 season.