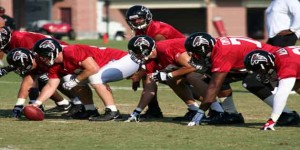 The Atlanta Falcons Tailgate Team stopped in at the Baytree Village Publix on Wednesday night. “Freddie Falcon” and two Falcon’s cheerleaders were among the team that stopped in on their way  through Valdosta. “Freddie Falcon” posed for pictures with fans in red and black and gave away raffle tickets for an upcoming Falcons’ game.

The stop in Valdosta is part of a marketing campaign which makes stops at 90 Publix locations in Georgia and Alabama to inspire Falcon’s fans to “Rise Up.” Shoppers were encouraged to purchase five items from a list of products to receive a gift from the tailgate team.

Falcons players are often at these events, but due to the distance from Atlanta they did not attend. However, members of the Falcons team will be at the Valdosta Mall on Friday.