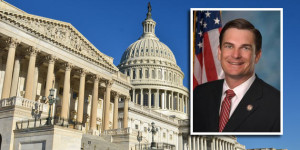 “Bees contribute an estimated $16 billion annually in added value to more than 30 percent of the crops we produce,” said Congressman Scott. “With the important role that bees play to our nation’s agriculture, the decline in bee colony health over the past several years has raised significant concern within the agriculture community. Today’s hearing took an important look at the current state of pollinator health in an attempt to gain a better understanding of the status of research on causes of and possible solutions to Colony Collapse Disorder.”

Approximately a third of global food production is dependent on animal pollination for reproduction, and managed honey bees are the most important pollinators of those crops. Reports of increasing colony losses in the United States are particularly alarming, not least because of the honey bees’ role in pollination and the absence of an easily identifiable cause.

To gain a better view of what is causing the current increase seen in Western honey bee colony losses across the Northern hemisphere, it is important to understand the key pests and diseases affecting bee health. Honey bees are affected by a number of pests and diseases including mites, various viruses, bacterial infections and fungal diseases.

The global picture identifies the honey bee parasitic mite, Varroa destructor, as the major factor in colony loss, with regions that have established mite populations, suffering consistently higher colony losses than those without. The role of the Varroa mite in colony losses is supported by a wealth of data. The mite itself contributes to weakening colony health and modifying bee behavior, but it also spreads secondary infections within and between colonies. A general consensus is emerging that this mite in association with a range of honey bee viruses is a significant factor in the losses of managed honey bee colonies seen globally.

The Agricultural Research Service (ARS), the U.S. Department of Agriculture’s (USDA) internal research agency, is leading several efforts to enhance overall health of pollinators by improving bee management practices and studying how best to control diseases and pests. Additionally, a number of other federal agencies, state departments of agriculture, universities, and private companies are conducting research studies to understand the causes of colony collapse. Members of the Subcommittee examined these research efforts to identify ways to remedy this problem. The recently passed farm bill, the Agricultural Act of 2014, included numerous provisions across the entire legislation to address declines in honey bee health.