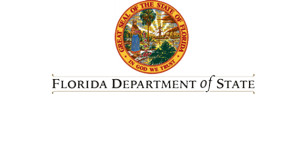 TALLAHASSEE, FL — Secretary of State Ken Detzner announced the eleventh annual Florida Heritage Month, March 15 to April 15, and the 2014 Florida Heritage Awards Ceremony on March 18 in the video below.  During this period of celebration, the Florida Department of State, along with Governor Rick Scott, have again planned a month-long tribute to heighten awareness of our state’s rich cultural heritage.

Florida residents and visitors will be able to embrace the wealth of historical sites, literary programs, cultural activities and events throughout the state. Heritage Month also creates opportunities to experience an understanding and appreciation of Florida’s commitment to supporting historic preservation, arts and culture, and libraries that create economic vitality, enhance quality of life, and instill community pride.

Doors will open at 5:30 p.m. for a reception. The Awards Ceremony will follow from 6:30 p.m. to 8:00 p.m. Secretary of State Ken Detzner will be presenting the awards. In addition to the honorees, the Florida Heritage Awards will feature cultural presentations representing historic Floridians who have contributed to our state and musical performances representing Florida’s diverse cultural heritage.