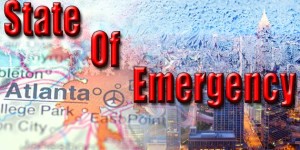 ATLANTA, GA – Gov. Nathan Deal announced Thursday that President Obama approved his request for a major disaster declaration for 39 counties that sustained damage the Feb. 10-14 winter storm. The declaration allows for the federal government to reimburse 75 percent of eligible expenditures and damage costs.

“The winter weather that overtook our state in mid-February caused millions of dollars’ worth of damage in many parts of our state,” Deal said. “The state of Georgia mobilized significant resources to ensure the safety of our citizens and our property during a time of crisis, and our costs far exceeded the federal threshold for disaster assistance. I appreciate the cooperation of President Obama and FEMA during this response effort.”

Bartow, Cherokee, Cobb, Dawson, DeKalb, Forsyth, Paulding, Polk and White counties were included in Deal’s request but not granted assistance due to not meeting the per capita threshold of $3.50 per person.