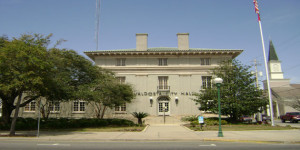 The City of Valdosta initiated planning discussions recently that brought together representatives from key local, state and federal agencies to seek solutions to a regional flood issue.

The 50-year flood event that occurred in late February, early March 2013 was a vivid reminder of the 2009 flood event that significantly impacted south Georgia. Since 2009, the city has worked to help identify potential causes and the scope and area of the regional flooding that occurred. This information has been shared with various state and federal officials and agencies in the hopes of gaining their interest and support to work together to address the regional flooding. Since Valdosta is located at the bottom of a 1,500 square mile drainage basin, the flooding is an issue that cannot be solved locally, but must be addressed by multiple agencies, jurisdictions and stakeholders. As a result, city officials are proactively seeking discussions with representatives of other impacted communities along the Withlacoochee River and Little River, as well as those across the state who may provide the necessary resources to address a solution.

“While the city’s efforts have raised awareness, these reoccurring events demonstrate the need for an appropriate agency to take the lead in conducting a comprehensive study of the drainage basin that literally extends to the Gulf of Mexico,” said City Manager Larry Hanson. “Once developed, this study will identify causes, alternative analysis, and the roles of federal, state and local governments and agencies to implement solutions to the regional flooding.”

“It was most encouraging to see the interest, concern, and support from so many entities. We always stand ready to serve the people in the Suwannee-Satilla basins in reducing flood risks,” said USACE Georgia Silver Jackets Coordinator Jeff Morris.

As a result of the meeting, the City of Valdosta and Lowndes County sent a letter of intent to the USACE to show our interest in participating in their Planning Assistance to States (PAS) program—a 50/50 cost share program which is designed for planning purposes, such as to complete a reconnaissance level flood risk management study. Further discussions with city, county and USACE staff led to the agreement to focus the funding on the most concentrated area impacted by flooding, which is where Two Mile Branch and Sugar Creek join the Withlacoochee River. The city is currently finalizing the scope and time frame with the USACE and plans to have it prepared by the May 9 Valdosta City Council meeting to approve the application and to commit the $75,000 in matching funds.

Several short-term and long-term goals also resulted from the meeting, which include seeking coordination with FEMA and GEMA to update flood maps as part of the Risk Map program, requesting a watershed study, and meeting with USGS and the National Weather Service (NWS) to discuss the flood warning and response process and the application of other potential funding sources. A preliminary meeting was held on May 1 with USGS and the NWS, along with staff from Valdosta, Lowndes County Emergency Management, DNR, USACE, and the Suwannee River Water Management District in preparation for a second regional meeting in June to begin more specific work.

“This initial meeting was very productive, and we will be requesting consideration of the Silver Jackets and/or state to serve as the lead agency on this regional effort,” said Valdosta Mayor John Gayle. “This is the first of many steps that must be taken to address the regional flooding that has impacted much of south Georgia and north Florida. The city is committed to work alongside each of the communities and agency partners involved to make sure that we work collaboratively to address the regional flooding without negatively impacting those downstream and the natural environment.”

Press Release from the City of Valdosta