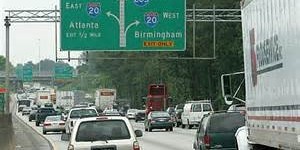 “Nothing’s off the table.”

Not particularly comforting words when they come from the chairman of the Georgia House Transportation Committee, Jay Roberts (R-Ocilla), especially when the reference is how Georgia will raise more revenue for infrastructure and other transportation needs.

Brings to mind, “Read my lips.”

Georgia has a billion dollar problem when it comes to transportation funding. That’s the figure commonly agreed upon as the amount necessary to develop new, upgrade and maintain roadways and bridges in the state. A legislative study committee held eight hearings across the state this summer and early fall to assess needs and suggestions for funding. A report on those findings was to be issued by the end of December but may be delayed another month after, rather than before, the legislature meets in January, 2015.

The subject was also a hot topic at the biennial conference for new legislators held earlier this month at the University of Georgia in Athens. And that susurrus wafting among the bureaucrats and seasoned legislators sounded a lot like “tax hike”. It appears that many in Georgia’s business community are already on board as well.

Georgia is a big state with 262,000 miles of road lanes, ranking ninth in the nation. This is around 30,000 more miles than the Earth is from the moon. That’s a lot of asphalt and concrete.

The economic growth Georgia’s experienced of late is because of its designation as a good place to do business and its business friendly personality. A large part of this is because of its (far better than average) transportation infrastructure and systems. These attributes cannot be ignored but must be continually strengthened and improved for Georgia to maintain its place as a leader in economic expansion. This benefits not only Georgians in terms of jobs but the state treasury as well in terms of revenue.

It’s more than “if you build it, they will come”. It’s also meeting the needs of those that are already here. How to best meet those needs is the rub.

While the Georgia Chamber of Commerce and other business consortiums have rarely met an “economic development tax” they didn’t like, they, and the legislature, would do well to remember that another huge component of businesses wanting to relocate here has to do with its fiscal conservatism: Georgia is a low tax state.

CNBC listed Georgia as the Number One state in the nation within which to do business for 2014. And the top reason for that designation was the lower cost of doing business in Georgia because, well, Georgia is a low tax state. This part of the formula needs little revision.

Georgia’s leadership ought to do what it’s proven itself capable of doing during the last few years and be innovative in addressing this funding issue. As Georgia’s economy grows, so does its revenues. Adopting programs and working with private enterprise to bring about more efficient logistics can realize a decline in traffic congestion.

Pursing and expanding the Inland Port initiative, for example, is a way to lessen the demands on the roadway infrastructure. This is achieved by “railing” cargo containers from our Georgia seaports to hubs located in enterprise zones across the state where those containers are then picked up and hauled to their interstate destinations. This cuts back on the number of miles 18-wheelers have to log to get goods from the coast to points inland. That’s smart, innovative thinking.

And there’s the existing motor fuel tax where the fourth penny is going to the general fund. Switch it back to where it ought to be: transportation projects. Take a look at the rest of the fuel taxes already in place and consider how to enhance revenue from those sources. Ronald Reagan slashed tax rates in the early 1980’s and federal government revenues soared. Maybe there’s something to lowering those tax rates. After all, Governor Deal recently wondered why Georgia gas pump prices were higher than South Carolina, Tennessee and Alabama. Taxes?

The point is that needing more revenue doesn’t necessarily translate into a need to extract yet more money from Georgia’s families. A combination of examining the demands on our infrastructure and how to reduce those demands along with prioritizing and making existing revenue programs more efficient is the key.

Otherwise, it’s the middle of December and the legislature convenes in less than a month. If the non-innovative, knee jerk path is traveled, then you better watch out.