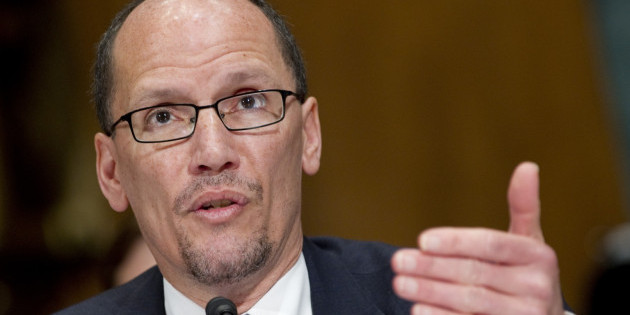 Were there any doubts existing about the Obama Administration’s proclivity toward eurosocialism those were dispelled last Monday when Labor Secretary Tom Perez gave a speech to the Nation Press Club.

Perez, Harvard educated (of course) and the former division head of the Justice Department’s civil rights division, presented a vision of proletariat and industrialist collaboration not very different than that existing across the Big Pond.
On the eastern shores of the Atlantic, the worker enjoys a 35 work week, four months of paid vacation, paid family leave, an 11.6% unemployment rate, falling productivity rates and a shrinking GDP.

According to Perez, however, it just doesn’t get much better than that. And he has a plan to get America there.

The secretary has an “all for one and all for one” mentality, so long as the “one” involves labor unions. “Unions don’t succeed at the expense of business; they succeed in partnership with business,” he said. That is, unions need a seat at the management table, otherwise they can’t be successful.

But weren’t unions devised to help the worker succeed, rather than the union itself? No matter.

“We need to create space in America for new forms of collaboration between workers and their employers,” Perez explained, no doubt meaning that he sees the unions edging closer and closer to a veto right over management. And note the use of the terms “workers” vis a vis “employees”, as in “workers of the world unite”, and “collaboration. Interesting choices.

After all, look how well it’s worked in Europe.

As eye opening as that world view is, consider Perez’ take on creating market place demand: “Let’s stimulate consumption in order to strengthen the economy.” Okay, so far so good. And “let’s” do it this way: raise the minimum wage from $7.25 to $10.10. This represents a 39% increase in an era where inflation has averaged 1.88% since 2011.

So how smart is that?

Government induced economic stimulation. Keynesian economics. Standard eurosocialistic tripe. It didn’t work when Obama, Reid and Pelosi rammed through the nearly $800 billion (with a “b”) “stimulus” package right after his inauguration and it won’t work now.

Such a move has an obvious disastrous effect on the entry level worker and the “working poor”, the very people the minimum wage law was designed to help and protect.

The secretary’s rationale for the increase is that if workers have more money to spend, then businesses get more customers. That works if employees keep their jobs and businesses expand their payrolls, neither of which will happen, according to these same studies, if a minimum wage rate hike goes into effect.

Interestingly enough, Perez seems to acknowledge that businesses actually have options when it comes to what they pay their employees. “Low wages are a choice; they are not a necessity,” he says. In the secretary’s mind, however, paying lower wages is all about sheer greed on the part of the employers.

The mindset of the left, the academia, the private enterprise illiterati, including Perez, is that businesses have the money to pay top scale wages but simply refuse to so because of the silly notion that it might make them less competitive.

Numbers and statistics are just indicators of a far deeper and disturbing issue. And that is that those at the helm of the USS United States of America honestly believe that government is the answer. They, as well as Secretary Perez, are of the opinion that if businesses would just give up more of their profits and autonomy to the federal government and the unions, then “all losses are restored and sorrows end,” as Shakespeare might say.

But Shakespeare wrote of two friends, not a mugger and a victim.

Wherever there are failed policies, there will be diversions to detract from that failure. The default position of the left are the diversions of class warfare, gender warfare, income disparity warfare, and the like. Blame the “haves” because there are “have nots”. Make competitiveness and creativity come to terms with the collaborative and inanity.

Well, collaboration wasn’t a very good idea for the Vichy government in France during World War II and there’s no reason to think it’s a good idea now.