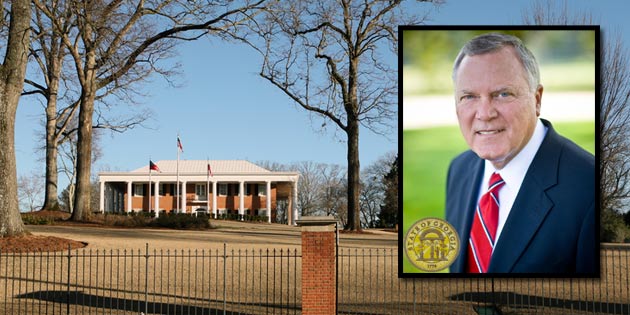 Deal’s appearance comes at a time when the latest polling data shows him tied with his Democrat opponent, State Sen. Jason Carter, and gaining momentum..
The event, held at Friends Grille and Bar located in the Summit Pointe office center, drew a crowd of around 100 who came to the meet and greet for coffee and a chance to hear Deal state his case for another term as governor. Deal was accompanied by his wife Sandra.

“Not since the governorship of Carl Sanders in the early 1960s has Georgia’s budget provided annual increases for education,” Deal said. Ensuring that resources are available for teachers and students is critical in keeping students in school, Deal pointed out. “This administration has not only succeeded in lowering the dropout rate in our high schools but we’ve also set our sights on retaining those enrolled in our universities, colleges and technical schools,” an area, Deal said, that hasn’t received much attention in the past.

By taking a closer look at the criminal justice system, including the juvenile courts, Deal says headway has been made in getting to the root causes of victimless crimes and offering solutions. “If an addict needs help and we can get that help to them outside of the prison system, then that’s what we need to do,” he said, adding, “Where we can modify that behavior, we can reduce the recidivism rate and save lives and money.”

The Governor pointed out that Georgia’s prison population has been reduced by 20% and took the state off the top of the list as one of the states with the highest percentages of its population in prisons. “We used to be looked at as being ‘mean’, and we decided to change that perception,” Deal said. He also noted that many of his reforms were passed unanimously or with little opposition, demonstrating his ability to work across party lines.

Addressing the recently signed agreement with the U.S. Army Corps of Engineers, the Georgia Department of Transportation and the Georgia Ports Authority to begin work on the Savannah Harbor Expansion Project, Deal proclaimed, ”This pivotal link in our logistics network will aid in the prompt delivery of valuable cargo to and from every corner of Georgia and, in turn, preserve and create jobs and encourage economic growth.”

The SHEP has been in the planning stages for over 20 years and it was just time to get things moving, Deal said noting that the “War Between the States” era ironclad the CSS Georgia, which was scuttled by its crew to prevent Union Gen Ulysses S. Sherman from capturing it when his forces took Savannah, will have to be removed as part of the agreement. “The U.S. Navy was quick to claim ownership but we were not quite as successful as we’d hoped in getting them to pay for its recovery.”

That was just fine, Deal said, since picking up the tab for the CCS Georgia was a small price to pay to get this project started.

Deal’s campaign swing will be followed by an appearance of GOP U.S. Senatorial candidate David Perdue who is expected in Valdosta on Tuesday evening