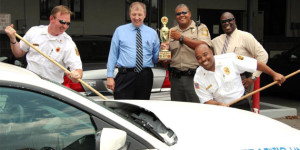 VALDOSTA, GA – The Valdosta Fire and Police Departments received overwhelming community support at the first annual Battle of the Badges “Guns & Hoses” Blood Drive, which was held on July 31 and brought in 91 units of blood—the most ever collected at a Valdosta City blood drive. The second highest number collected was 51 units at an October 2006 blood drive.

Per the original “agreement” between the chiefs, VFD personnel—who lost by only three units of blood, 44 to 47—had the soap and water out this afternoon scrubbing down the VPD vehicles. The friendly interdepartmental competition aided the American Red Cross in their life-saving efforts at a particularly crucial time when blood donations have been low due to summertime activities and vacations.

“We’ve had some fun with this competition raising donations for a great cause,” said Valdosta Chief of Police Brian Childress as he accepted the coveted large trophy. “We would like to thank the men and women and friends and family of the Valdosta Police and Fire Departments. We all win when we come together to save lives.”

Both chiefs look forward to a repeat event next year and even larger turnouts.

“This event just goes to show that we can have fun serving the community with our combined resources and make a significant contribution at the same time,” said Valdosta Fire Chief Freddie Broome, adding that he looks forward to the Fire Department winning the trophy next year.

City Manager Larry Hanson applauded both agencies for giving back to the community during such a critical time of need for blood.

“The local Red Cross chapter had issued an appeal with an urgent need for blood donations,” said Hanson. “As they do each and every day, our public safety agencies responded to a community need and went above and beyond the call of duty. These men and women serve and protect, and this is just another example of serving others and saving lives.”