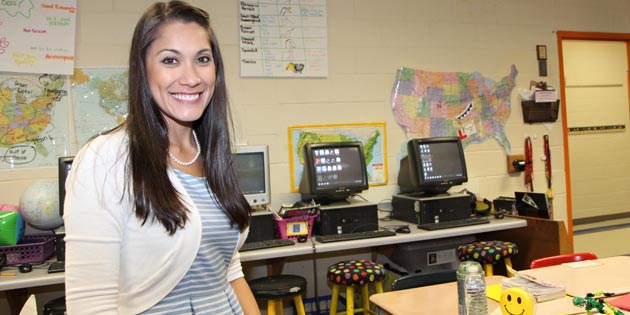 Bringing awareness to the importance of education and the teaching profession is a top priority for Miliner.

“I want to give a voice to teachers,” said Miliner. “I really want people genuinely to understand the many hats and roles that teachers play. I don’t think most people understand our days and what it is like. I would love for people to spend a week, not a day, anyone can last a day, and really see what it is like as an educator.”

After graduating from Valdosta State in 2006 with a degree in early childhood education, Miliner placed her teaching career on hold to compete in the Miss Georgia pageant, and while competing under that title she became second runner-up in the 2007 Miss America pageant. She later represented Georgia in the Miss USA pageant.

The pageants provided Miliner with the opportunity to travel internationally and promote the Big Brothers Big Sisters organization.

“I spent time traveling and trying to find myself,” said Miliner, who married her high school sweetheart, Kellen Miliner, in 2010. “I finally found myself at Barnes and Noble with a bunch of self-help books and realized that I wanted to teach. It is my real love.”

As a child, Miliner recalls the support she received from her teachers and works to provide that same guidance and mentoring to her students.

“When I was younger my mother was a single parent and was gone a lot because of her duties in the military,” said Miliner. “I bounced a lot from house to house and I think I found the need for support from teachers and realize now how important teachers were in mylife.”

It was Miliner’s mother, Jolene Kozak, who encouraged her to go to college and pursue her dreams.

“My mother knows that I love to learn; I could be a professional student if someone would pay for it,” said Miliner, who credits the Miss America pageant with providing her educational scholarships. “She always knew I would go to college and she instilled that in me.”

While attending Valdosta State, Miliner became involved with Big Brothers Big Sisters, an involvement that changed the course of her life.

Miliner explained that her “little sister” was a student in Julie Hiers’s class at S.L. Mason Elementary.

“She [Hiers] is an amazing teacher,” said Miliner. “When I saw her teaching I changed my major from psychology to early childhood education.”

Hiers, who is now assistant principal at Sallas Mahone Elementary, is not surprised with Miliner’s success as a teacher and recognizes that she has a special gift for teaching.

“I knew right away…the way she interacted with the students, parents, and other teachers,” recalls Hiers. “The children were drawn to her. You could sense that she has a love for teaching and the students.”

Along the way, Miliner has benefited from mentors who have encouraged her teaching career. She also gives credit to her family for the success she has received as a teacher.

“If it were not for my family, especially my husband, I would not be the teacher I am today,” said Miliner, who has two children, Jordan and Avery. “When I am working on projects, grading papers, or researching new teaching strategies my husband is watching our two children. That is more time away from my family, but I do it because my students need it.”

In her Georgia Teacher of the Year application, Miliner stated, “As great as these accomplishments are they are not what I’m most proud of. I am most proud of the fact that I can stand before my students as an example of what hard work and determination can do. I am also proud to stand before my peers as a proud educator who is blessed to work in a profession where each day is meaningful and relevant.”