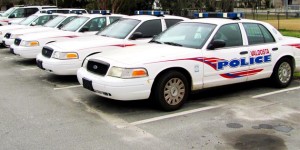 VALDOSTA, GA – The Valdosta Police Department is asking for the public’s help in locating the suspect in a recent kidnapping in Valdosta.

On June 24, 2014 at approximately 7:30 pm, the Valdosta Police Department responded to the Wal-Mart on Inner Perimeter Road in reference to a robbery by force. Officers arrived and were advised by Jhalisa Austin that while she was standing outside she saw her ex-boyfriend, Malcolm Holsendolph, running towards her. Austin indicated that she ran inside where Holsendolph caught up to her, they started arguing, then Holsendolph picked her up and carried her outside.

Holsendolph left the store and drove off in the Nissan Altima. A short time later, the car was found at Holsendolph’s residence, but he could not be located.

Arrest warrants for Kidnapping, Robbery, Battery, and Theft by Taking have been signed on Holsendolph. Anyone who has contact with or knows the location of Holsendolph is asked to contact law enforcement.