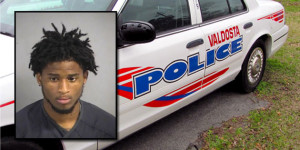 Authorities say arrest warrants have been signed on Travis Stewart for two counts of Aggravated Assault and one count of Burglary for the incident at 308-A Emory Street.

On Monday night, Chen Zhao, 56, and William Zhao, 15 were both shot after two African American males forced open their front door and demanded money. Tian Zhao, the husband of Chen Zhao, heard the commotion in the front of the house, and then opened fire on the two suspects.

While at the first incident police received another call in reference to someone being shot at 2406 Oxford Drive. Officers arrived and found Travis Stewart inside the residence with multiple gunshot wounds.

The Valdosta Police Department later reported that warrants had been signed for Stewart’s involvement in the Emory Street incident.

Chen Zhao and Travis Stewart are still hospitalized at South Georgia Medical Center. William Zhao has been released from SGMC.