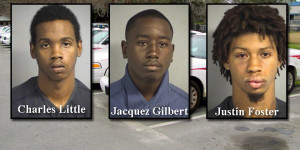 On May 8, 2014 at approximately 3:20 am, the Valdosta Police Department conducted a traffic stop in the 900 Block of Northside Drive. Demarquez Bartee and Jacquez Gilbert, who were passengers in the vehicle, were identified and arrested without incident for the May 2nd shooting at 2533 Forrestwood Drive.

Both Bartee and Gilbert were transported to the Lowndes County Jail.