Home /Latest News/Sgt. Douglas Bennett Honored as May Employee of the Month
Share with friends 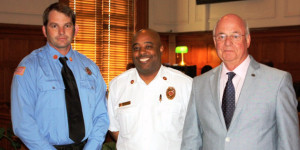 VALDOSTA, GA – Valdosta Mayor John Gayle and Fire Chief Freddie Broome honored Sgt. Douglas Bennett as the May 2014 Employee of the Month at the May 8 City Council meeting. Sgt. Bennett received a framed certificate, a check for $200 and his name appears on a plaque that is displayed inside of City Hall.

Sgt. Bennett, who joined the Valdosta Fire Department in December 2005 as firefighter, was promoted to a Sergeant in 2011. Recently Sgt. Bennett led a group of Fire Department personnel in a project to renovate the bathrooms at Fire Station #1. The shower stall inserts were cracked and leaking, which caused a foul black mold to grow behind the sheet rock walls.

Sgt. Bennett, who has a background in tile work, solicited the help from A-Shift and B-Shift Fire Department personnel and led the team in cleaning out the area, collecting and selling the metal and scrap, and then using the money to buy the new tile and fixtures needed to renovate the bathrooms. The project took several weeks to complete and included laying tile and pouring concrete for the new shower.

Sgt. Bennett’s dedication and commitment to the VFD saved the City of Valdosta nearly $5,000 and improved the living quarters at Fire Station #1.

The City of Valdosta congratulates Sgt. Douglas Bennett for going above and beyond the call of duty and for being selected as the 2014 May Employee of the Month.