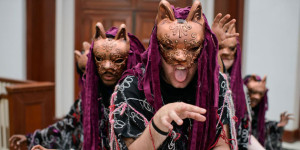 VALDOSTA, GA — The Valdosta State University Department of Music will present “Dido and Aeneas” at 7:30 p.m. on Saturday, April 19, and 3 p.m. on Sunday, April 20, in the West Hall Rotunda. Seating is limited to 100 people per performance.

Dr. Carol M. Mikkelsen, director of VSU Opera, described the short opera as a “Greek-Roman tragedy about Dido, once a goddess who became the human queen of Carthage, and Aeneas, the Trojan warrior prince who eventually founded the new Troy (Rome). He became shipwrecked on his way to Italy in Carthage and stayed long enough to fall in love with the widowed Queen Dido. Just as their future as husband and wife seemed to be in place, the forces of evil, personified by witches and a sorcerer, plotted to separate them. Aeneas left on his fore-planned journey, and Dido, grief-stricken, takes her own life in despair.”

A tragic opera presented in three acts, “Dido and Aeneas” was written by the English Baroque composer Henry Purcell, with a libretto by Nahum Tate, based on his own play “Brutus of Alba” and Virgil’s “Aeneid.” It was first performed at Josias Priest’s school in Chelsea, London, before December 1689.

Traditionally, VSU Department of Music performances are held on the first floor of the Fine Arts Building, in Whitehead Auditorium. However, Mikkelsen explained the change in performance venue, saying, “The historic Classical architectural style of the West Hall Rotunda is perfectly suited for the setting of the opera, ancient Greece, and because ‘Dido and Aeneas’ is a chamber opera, the size of the Rotunda works well acoustically and dramatically.”

The cast of the university’s performance of “Dido and Aeneas” is comprised of VSU Opera students and members of the Chamber Singers, who recently returned from a weeklong musical journey through historic England. A live instrumental chamber ensemble consisting of five string players and a harpsichord will accompany the vocalists.

“Approximately half of the music for ‘Dido and Aeneas’ is choral,” Mikkelsen noted. “Choral and solo singing is interspersed continually. The role of the chorus in this Baroque 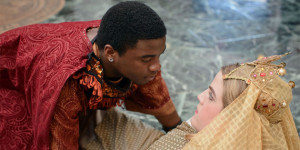 opera, which attempts to recreate the ancient Greek tragedy, is to reflect on the action and sentiment of the lead characters.”

Tickets for “Dido and Aeneas” are $25 for adults, $5 for non-VSU students, and free for VSU students with valid identification and may be purchased by calling (229) 333-2150 or visiting www.valdosta.edu/music/opera before 5:30 p.m. on Thursday, April 17. If space is available, tickets will be sold at the door.

Mikkelsen noted that the performance “is appropriate and should be appreciated by all age groups. The music is beautiful and the drama is compelling.”

The Men and Women of “Dido and Aeneas”