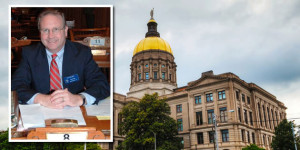 VALDOSTA, GA –  After 34 years in public service Senator Tim Golden has announced he will not be running for re-election for the Georgia State Senate, District 8. Sen. Golden says he has decided to devote more time to his business career and family.

Sen. Golden has served 10 years as an aide to former Congressman Charles Hatcher, 8 years as a member of the Georgia House of Representatives and the past 16 years in the State Senate. During this time, he has had his hand in a variety of legislation that has effected the District and the State of Gerogia. Some of these include:

Golden was listed among the “100 Most Influential Georgians”  this year by Georgia Trend magazine for the third time in the past six years.