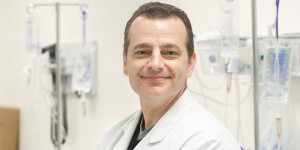 VALDOSTA, GA – Dr. J. Myron Faircloth, an assistant professor in the College of Nursing and Health Sciences at Valdosta State University, has been selected as a member of the second class of the State Bar of Georgia’s Citizens Advisory Council.

It was Attorney General of Georgia Sam Olens who nominated Faircloth to the State Bar of Georgia’s Citizens Advisory Council.

Faircloth joined the VSU faculty in 2007 as an instructor in the College of Nursing and Health Science’s Adult/Gerontology Nurse Practitioner Program. A practicing family nurse practitioner with admitting privileges at Smith Northview Hospital, he maintains an active practice at G & G Family Medicine MD PC, where he has worked since 2011, when not teaching. The Hahira resident is a member of the Golden Key International Honour Society, National Organization of Nurse Practitioner Faculties, and American Academy of Nurse Practitioners.

Faircloth earned a Doctor of Nursing Practice from Georgia Southern University in 2011, a Master of Science in Nursing from Brenau University in 2002, and a Bachelor of Science in Nursing from VSU in 1995. He is a Georgia Board of Nursing-licensed registered nurse and advanced practice registered nurse. He is certified as a family nurse practitioner by the American Nurses Credentialing Center and the American Academy of Nurse Practitioners.

In January 2013, Faircloth kicked off a four-year term as a member of the Special Advisory Commission on Mandated Health Insurance Benefits. Appointed by Gov. Nathan Deal, his role with this group is to advise the governor and Georgia General Assembly on both the social and financial impact of current and proposed health insurance benefit and provider mandates on small businesses.