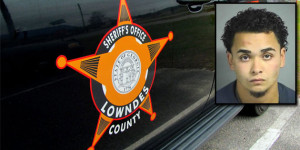 VALDOSTA, GA – The Lowndes County Sheriff’s Office arrested a man earlier this week after he attempted to flee after a traffic stop.

On Wednesday evening, around 11:30, a deputy with the Lowndes County Sheriff’s Office, Interstate Criminal Enforcement unit stopped an Acura for a window tint violation. While speaking with the driver, Jorge Jiminez, 20 years old, of Cape Coral , FL, the deputy learned that Jiminez was wanted by the Lee County, Florida Sheriff’s Office for violation of probation. When the deputy asked Jorge Jiminez to step out of the vehicle he placed the vehicle in drive and sped away. The deputy then radioed for assistance and was soon joined by other deputies as the chase continued north on I-75 at speeds in excess of one hundred (100) miles per hour.

As the pursuit continued, Lowndes County deputies were assisted by the Georgia State Patrol and the Cook County Sheriff’s Office. At some point one of the rear tires separated from the vehicle causing the vehicle to slow, but the driver continued to flee. Jiminez exited the interstate at Exit 41, but he immediately got back onto the interstate and continued north. The chase ended near the 42 mile marker when Jiminez struck a patrol vehicle and wrecked. No  one was injured during the chase.

Jiminez was arrested and taken to the Lowndes County Jail where he is facing multiple charges; fleeing and attempting to elude, window tint violation, and interference with government property. In addition to the charges in Lowndes County, Jiminez could face charges in Cook County, and a hold has been placed by the Lee County Sheriff’s Office for the warrants in that jurisdiction.

He will appeared in the Lowndes County Magistrate Court Thursday afternoon for an arraignment hearing. The passenger in the vehicle was released with no charges.