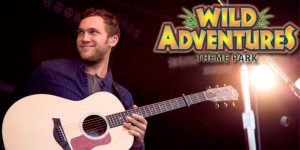 VALDOSTA, GA – Wild Adventures Theme Park announces its 2014 all-star concert line-up including a platinum selling American Idol winner, a trio of country legends and a nine time GRAMMY® award winning gospel artist. Among the performers are three with local roots, recent American Idol winner and Leesburg native Phillip Phillips and Valdosta born Rhett Akins with his country chart topping son Thomas Rhett. All of the concerts are included with park admission or a 2014 Season Pass, on sale now. Reserved concert seats are an additional cost and available to 2014 Season Passholders now through February 13.

The 2014 concert series begins Saturday, March 29 with a Passholder Appreciation Concert of Roots & Boots featuring Sammy Kershaw, Joe Diffie and Aaron Tippin. 2014 Passholders will receive a pair of reserved concert seats FREE to enjoy this concert. Reserved seats will be given on a first come, first serve basis Saturday, March 29beginning at 10:00 AM at the park.

Plus one more concert announced soon!

*All performers and dates are subject to change due to circumstances beyond the park’s control.

· Kellie Pickler – Country sweetheart and 2013 winner of ABC’s Dancing with the Stars.

· REO Speedwagon – Legendary rock band famous for their power ballads like “Keep on Loving You” and “Can’t Fight This Feeling.”

· Billy Currington – Since 2003, Billy Currington has released five studio albums which have produced ten singles on the Billboard Hot Country Songs and Country Airplay charts, including seven No. 1 hits.

· Jeremy Camp – Since the release of his debut album Stay, Jeremy Camp has had an impressive career with 25 No. 1 radio singles as a contemporary Christian artist.

· Skillet, We As Human – Skillet is an American rock band with high energy performances that please fans with No. 1 hits like “American Noise” and “Sick of It.” We As Human is a Christian hard rock band who was most recently nominated for 2013 Best Rock Song of the Year Dove award for “Strike Back.”

2014 Season Passes provide unlimited admission to Wild Adventures and Splash Island Water Park for the 2014 season and are on sale now through April 13, 2014starting at $64.99 at WildAdventures.com. For $20 more, a Gold Season Pass includes free parking (a $10 value per visit), miniature golf, go-karts, and discounts on dining, shopping and reserved concert seats.