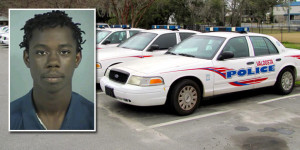 On Tuesday, February 25, Valdosta Police Officer Jason York was on patrol when he attempted to stop a suspicious black in color Ford Focus occupied by two African American males. Upon attempting to stop the vehicle, the suspect vehicle sped off and York later determined the vehicle was stolen from 1500 East Park Avenue on February 24, in Valdosta. The vehicle was located at 800 Scott Drive. A perimeter was established by Valdosta Police Officers and a Valdosta Police K-9 Team began to track the area. While conducting this track officers located a 14-year old juvenile who was apprehended and Hughtavius Godfrey, 17 years of age, was also located.

Both Godfrey and the juvenile were charged with motor vehicle theft, theft by receiving stolen property, and theft by entering motor vehicle.

Valdosta Police also arrested two other offenders in an unrelated case for a burglary that occurred at 1600 Fresno Drive on February 24, 2014.   Telvin Demps, 22 year old Valdosta resident and Kristopher Brantley, 20 year old Valdosta resident have been charged with burglary regarding the incident.  Some of the property taken has been recovered.  Anyone having any further information regarding this incident is encouraged to contact the Valdosta Police Department.

Suspicious activity was reported by a citizen relating to this incident.  This information helped officers and detectives solve this burglary.  VPD says it is extremely important that citizens who witness suspicious activity to call 911 and report it immediately

These arrests are part of an increased effort by the Valdosta Police Department to stop burglaries and vehicle break-ins in the city.

VHS Volleyball to Host Round…

Vikings vs Packers during senior…